What difference does it make to be a refugee? New report on Refugee Economies in Kenya

Kenya hosts nearly half a million refugees and limits refugees’ right to work and freedom of movement. This new research is based on 4366 survey responses and covers both Nairobi and the Kakuma refugee camp. 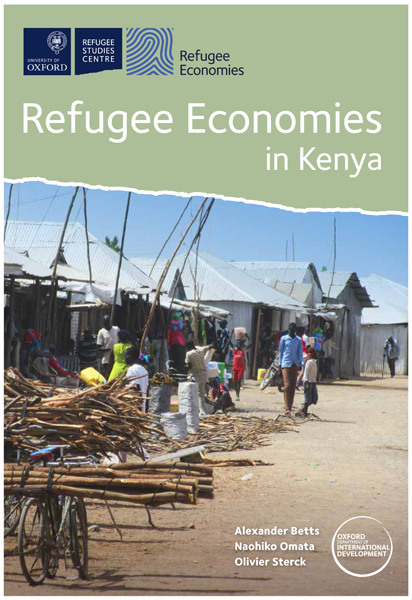 In Kakuma camp, refugees are better off than the surrounding host population. For example, even though they have comparable employment levels, working refugees’ self-reported median income is almost three times higher than for the local Turkana (around $55/month compared to under $25/month), and refugees have better diets, higher consumption, and more assets. Despite the gap, the Turkana hosts benefit immensely from the refugee presence.

In Nairobi, although refugees are better off than they would be in camps, they are worse off than the local host population across almost all metrics. For example, comparing Somali refugees with local hosts, the employment levels are 44% and 60% and the income gap is $150/month compared to $200/month, while refugees do worse across all other living standards indicators.

Four sets of factors seem to explain these gaps between refugees and hosts: regulation (how you are governed), networks (who you know), capital (what you have), and identity (who you are).

In some cases these factors may advantage refugees, and in other cases they may disadvantage refugees relative to hosts. For example, in terms of regulation, refugees are disadvantaged, and we show the cost to refugees of these restrictions. In Kakuma, refugee entrepreneurs are disproportionately likely to incur ‘business tax’ (30% of Somalis businesses pay compared to 10% of Turkana businesses), and to be forced to pay police bribes (10% of the Turkana, compared to 54% of South Sudanese, 43% of Congolese, and 23% of Somalis).

But in terms of networks, refugees often have advantages. In Nairobi, for example, 43% of Somalis receive remittances (at a median level of $2500/year) compared to 36% of the surrounding community ($1200/year).

Three practical insights stand out: 1) even in a country with restricted regulations, refugees are economically active; 2) refugees’ and hosts’ economic lives are interdependent: a good refugee policy must also be a good host community policy; 3) every major refugee-hosting context should have an economic policy and strategy specifically for refugees and the immediate host community, based on robust analysis and consultation.

The research is the first part of a broader multi-country, multi-year panel dataset, which also focuses on Uganda and Ethiopia, and will follow refugees and host communities over time.

The report is being launched alongside a new Refugee Economies Programme. The programme’s website, which is also being launched today, will be available at www.refugee-economies.org

Talent displaced: The economic lives of Syrian refugees in Europe