It is not often that we think about what life is like for refugees who have been resettled to a new country. Considered to be one of the three durable solutions offered to refugees, resettlement to a country like the US is a goal for many refugees living in the global south. However the ‘American dream’ is not always what it is thought to be.

The Humanitarian Innovation Project (HIP) team recently spent a week in Dallas, Texas meeting resettled refugees living there. Recently Texas has consistently received more resettled refugees than any other US State, and Dallas has long been recipient to a high number of refugees. It is home to refugees from numerous countries, including Iraq, Myanmar, Bhutan, Burundi, Somalia, Ethiopia, Democratic Republic of Congo, Eritrea, and Mauritania.

The main area we visited during the week was the neighbourhood of Vickery Meadow to the north of the city. This area of around 1,000 acres is home to 36,000 people from around the world. This year alone, it is estimated that 850 refugee families have been resettled here. Vickery Meadow is surrounded by high-end apartments where wealthier inhabitants of the city reside. But the residents and services in Vickery Meadow are segregated from the benefits that come from the wealth of the city. 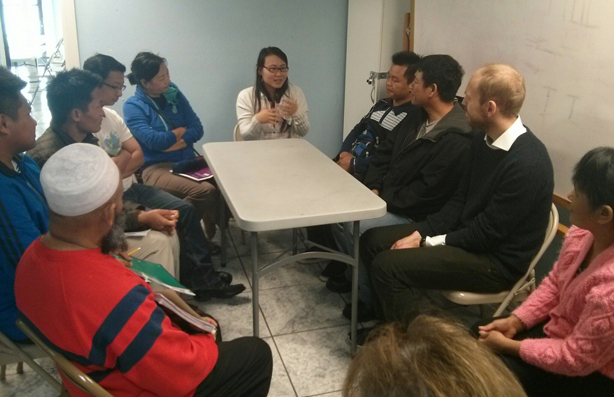 © L BloomMany resettlement agencies, voluntary organisations, NGOs and churches are working hard in Dallas to provide the extra services refugees need when they arrive. Orientation classes, advice and support in finding jobs, English language schools, health clinics, and after-school clubs are just a few examples of the services available. We met several people working with these organisations and saw some of the work they are doing in Vickery Meadow.

From speaking to just a handful of service providers and refugees during our short visit, we learned that there is a high demand for research in this area to better understand the way that refugees live in Vickery Meadow. There is currently little consolidated data which accurately represents the numbers and demographics of the resettled refugees living there. The way that refugees use their existing skills and experience employment in the US is also a huge missing piece of the puzzle. After being provided initial services and support for the first 6-9 months into resettlement, little is known about the trajectories of refugees after this time. Many families were said to move away from Vickery Meadow to pursue employment, for example in industries offering low-skilled work in factories.

Related to our work exploring Refugee Economies in Uganda, we observed some of the challenges the resettled refugees in Dallas seemed to experience in being able to obtain employment or start businesses of their own. Language was a key barrier for many who arrived only speaking their native tongue. English classes were provided by charities nearby, but lack of language skills prevented many from being able to engage in work in the city.

Due to the diversity in Vickery Meadow, tensions had been reported between the migrants and refugee populations. One of our hosts who had conducted research with migrant populations in Vickery Meadow explained that many migrants saw refugees getting services which they had not had access to when they arrived in the US. This perceived special treatment added to the tension, leaving some refugees afraid to leave their homes and feeling unsafe in their neighbourhood.

Dallas is a sprawling city with a large road network and limited public transport, which further restricts refugees’ economic activity. Many of the refugees we met explained the challenges they faced when they first arrived and did not have a car to get around. Transportation was a widespread issue, not only for conducting daily life but also in being able to travel to work or access education and health services. A young female Burmese refugee recalled the first few months of her time in Dallas with her family – where they would be able to reach an Asian supermarket, selling the foods they were accustomed to eating, only once a month since they would wait to be taken by the only person they knew with a vehicle. This large city landscape also has dedicated zones for commercial activity separated from residential areas – again making it more difficult for those with limited transportation to access shops, jobs and other commercial services.

Despite the challenges for resettled

© L Bloomrefugees in finding jobs and facing discrimination in the city, during our short visit we also met successful refugees who had managed to make the most of the opportunities the city had to offer. Bukri and Daniel were owners of a delightful Ethiopian restaurant in Dallas. Many Ethiopians live in the city and restaurants making traditional Ethiopian food, and shops selling Ethiopian products, food and music, are common in some areas. Bukri and Daniel however had a new innovation that they were starting to build a business around. They had bottled an Ethiopian cooking sauce, traditionally used for a special dish when guests visit Ethiopian homes. Typically Ethiopian women would spend a minimum of five hours cooking this sauce at home, but Bukri and Daniel formed their new idea when a regular customer to their restaurant came to urgently only purchase the sauce. They have a large demand for the ready-made sauce and now sell it to shops all over Dallas and to some other States across the country. Scaling up the business is still a challenge however. Daniel has attended classes on business training and financing, but is still struggling to get the right kind of investment to independently create a manufacturing plant. 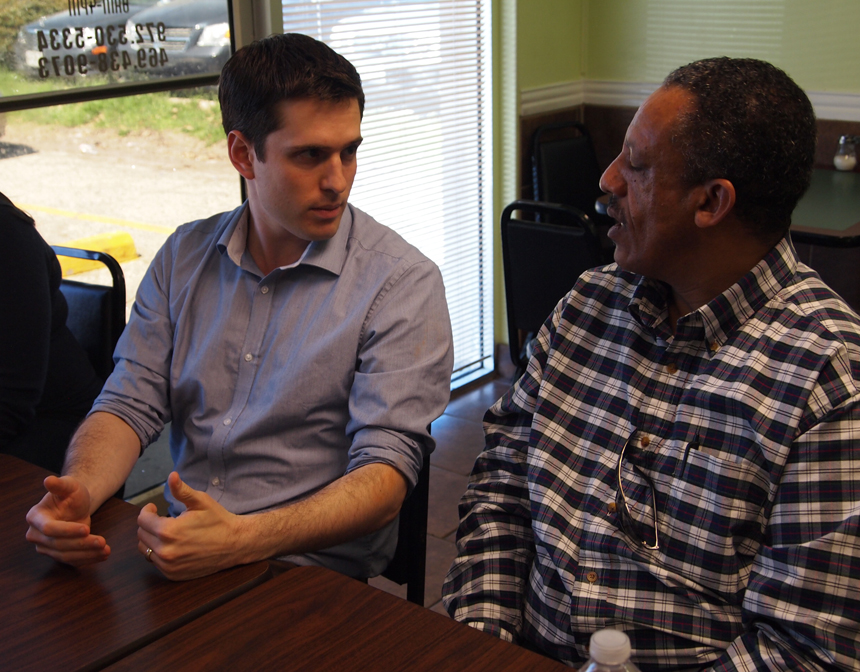 © L BloomOur week in Dallas allowed us to capture just a glimpse into the lives of resettled refugees living there, and to meet some dedicated people trying to help them overcome the challenges. Kiflu Hussain, a former HIP researcher with us in Uganda, was recently resettled to Dallas, and is now working with the Hunt Institute for Engineering & Humanity to find and support refugee entrepreneurs such as Bukri and Daniel. With so much activity and a clear demand to better understand how refugees can be supported in this context, it was clear that research in Dallas could contribute to the way refugees are perceived and assisted in the US.

Later this year, RSC and HIP Director, Alexander Betts, will be speaking about resettlement practices at the 5th national EMN Conference “Resettlement; regional solutions and humanitarian assistance”, to be held in Oslo, Norway on 12 June. The conference will focus on current policies and best practices as well as challenges in the field of resettlement.

Mobility and sanctuary: how to revive asylum in Europe

Ukraine: the UK is failing to meet its obligations under the 1951 Refugee Convention | Catherine Briddick

The Global North is closing its doors to migration | Matthew Gibney

Whether or not Kenya closes its camps, much damage has been done | Cory Rodgers