This article was originally published on The Conversation under a Creative Commons Attribution-NoDerivs licence. Read the original article >>:

Thousands of Rohingya and Bangladeshi migrants have been left stranded at sea, after a crackdown against people traffickers in Thailand prompted dozens of boat owners and crew to abandon their human cargo.

Those at sea have been left without food and water, and will certainly die if they are not rescued soon. Now that more than 2,000 people have been rescued or arrived at their shores, Indonesian, Malaysian and Thai authorities have united in refusing to rescue further boats and claiming that they will turn back any more arrivals.

Their refusal to accept Rohingya boats mirrors the early years of the Indochina refugee crisis, when Indonesia, Malaysia, the Philippines, Singapore and Thailand collectively refused to grant asylum to arrivals from Cambodia, Vietnam and Laos. After thousands of people had been pushed back by land and sea, that situation was eventually resolved with an agreement for permanent resettlement of refugees to western nations, primarily the US.

But that was a very different time, shaped by Cold War politics that are now a distant memory. Today, with the European Union showing little sympathy for boat arrivals on its own shores, a coordinated international response seems highly improbable.

Thailand’s crackdown on migrant traffickers followed the discovery of a mass grave in a suspected trafficking camp in southern Thailand. But while trafficking is undoubtedly a very real risk, Rohingya migration is not only or even primarily an issue of trafficking, and pushing back boats is not the answer.

Many of those now stranded at sea are not voluntary migrants but refugees who face persecution if returned to Myanmar. As in the Mediterranean, ending boat migration in south-east Asia will require shifting the focus from smugglers and traffickers to address the drivers of forced migration. For the Rohingya, that means tackling statelessness and human rights violations inside Myanmar, and discrimination throughout south east Asia.

This is obviously easier said than done. The crisis facing the Rohingya in Myanmar is an entrenched, intractable problem with few avenues for positive reform. Rohingya communities have been denied citizenship for decades and face draconian restrictions on travel, movement and marriage. This has been compounded recently by the cancellation of all Temporary Registration Certificates, the only identity document that most Rohingya possess, and a document required to vote in the upcoming elections.

Myanmar’s Rohingya fear for their survival. Those who have fled to Bangladesh have fared little better, with little or no access to education and health services and very restricted access to the UN and other international agencies. These conditions have forced migration to other countries: to Thailand, Malaysia and Indonesia but also to India, Nepal and even Saudi Arabia.

What can ASEAN do?

To stop the immediate humanitarian catastrophe unfolding in the Andaman Sea and Malacca Strait, and to develop a lasting regional solution, member states of the Association of Southeast Asian Nations (ASEAN) need to step in.

Until now, ASEAN’s policy of non-interference in the internal affairs of a member state has prevented regional discussion of Rohingya statelessness and discrimination. The current crisis clearly shows that this is not a matter of Myanmar’s internal affairs but is affecting many other countries in the region. ASEAN members have a stake in resolving this situation and must cooperate in doing so. 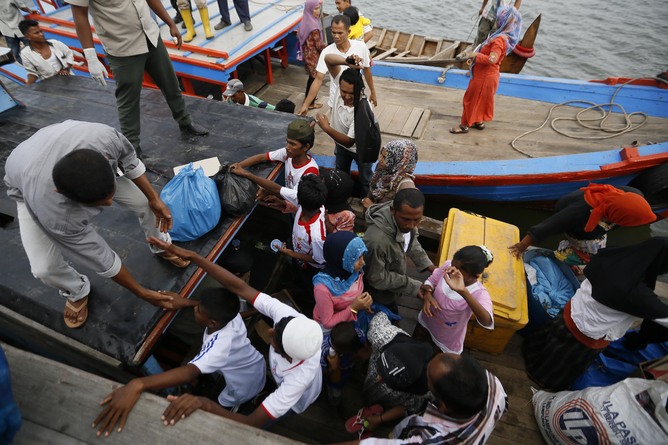 A meeting has been arranged in Bangkok for May 29 2015, but those at sea will certainly die if no action is taken before then. There is an urgent need to stop boat pushbacks and begin emergency rescue of those stranded.

In the longer term, the focus must be on improving the treatment of Rohingya people inside Myanmar. Full citizenship for stateless Rohingya is difficult to envisage in Myanmar’s current political climate, but there are other possibilities. ASEAN Parliamentarians for Human Rights have outlined a number of constructive suggestions, beginning with providing a mandate to the ASEAN Intergovernmental Commission on Human Rights to investigate the situation and officially monitor Myanmar’s response.

Practical action that should be taken by Myanmar includes improving basic living conditions of Rohingya communities in Myanmar by ensuring access to clean water, adequate nutrition and health care and appropriate shelter materials. Administrative and legal reforms should end discriminatory restrictions on Rohingya people (such as restrictions on movement and marriage) and reinstate the temporary registration cards that were recently withdrawn. Crimes of discrimination and hate speech should be prosecuted, not permitted to flourish as they have until now.

ASEAN member states have a key role to play, but this is not solely an ASEAN responsibility. Many states have flocked to provide aid and assistance to Myanmar since a process of political reform began in 2011. Those states are now entitled to demand some return for their investment, in the shape of an improved protection environment for the Rohingya and for other ethnic groups inside Myanmar.

In the meantime, a massive humanitarian crisis is unfolding in south east Asia. Thousands of people remain stranded at sea, and they will certainly die if they are not rescued soon. But as in the Mediterranean, tragic suffering could still be averted if those with the power to act would only show some moral leadership and begin the required rescue.

The Global North is closing its doors to migration | Matthew Gibney

The United States Can Afford More Refugees | by Alexander Betts

A Social History of Soup, with Tom Scott-Smith